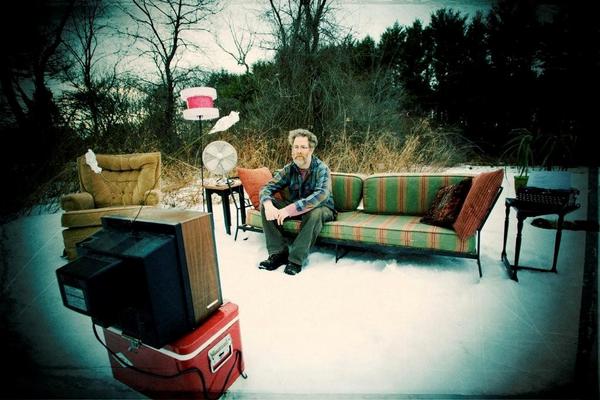 Guy picked up the guitar when he was 10 years old, allegedly “never getting any better at it” after 20-something years of playing. Growing up in Mamaroneck, New York, high school memories are “driving to the Bronx at lunch time for bags of crappy pot sprayed with hairspray to make it seem more bud-like.” He left that all behind in order to study philosophy at Plymouth State College. Quitting after two years, he traveled around the U.S., hitting 42 of the 50 states. He moved into Portsmouth in 1987, resuming his studies at UNH while enjoying public transportation (though he had a car) as it “provided a lot of fodder for stories because freaky people take the bus,” and graduated with his philosophy degree in 1989.

Between 1988 and the birth of his record label Two Ton Santa, Guy was in the bands Fancy Pants, Toast, Size of Guam, The Driveways, Up-a-Tree, Beekeeper, The Pants, Bob & Guy, and The Crotch Wax Menace, “and probably some others I’m forgetting as well,” he guesses.

Sometimes, it was a one- or two-gig existence for the band, sometimes not. Sometimes, it was just a matter of trading musicians in and out of bands because everyone was connected to the same people and places. He played with the country band The Buckets, now based out of San Francisco, and comprised of Ray Halliday, Mary Lou Lord and Carrie Bradley. He headed up Two Ton Santa (the band, not the label), a two bass, drums and guitar ensemble with one singer. Guy’s band Milk of Magnesia, “a psychedelic band, almost,” opened their first show at The Rat with a faux imbibing of magnesia milk, inspiring audience members to volunteer their own drinking efforts, only they swallowed the real thing, which Guy seems to think they enjoyed quite a bit.

With his ingenious talents spanning the flowerbeds and the nervously approached stage, one might never guess this songwriter/performer/landscaper also has a mean forehand in Ultimate Frisbee, once raced Motorcross bikes, and was on the wrestling team in high school. Between all that, running Two Ton Santa Records, and cameos at The Friendly Toast, he continues to write his mostly abbreviated songs, which he lovingly describes as “little story vehicles” – “like a paper boat. Sliding into the ocean. On fire.”

The Silence of Our Predicament